Kicking off the Second day at the CXO Leaders Summit with Andrew Brent, Former CMO for Barclays Bank

Kicking off the Second day at the CXO Leaders Summit with Andrew Brent, Former CMO for Barclays Bank 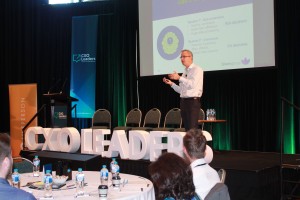 Starting the second day at the CXO Leaders Summit strong with Andrew Brent, Former CMO for Barclays Bank spoke about ‘The Growth Paradox – Why Sustainable, Profitable Growth is so Difficult to Achieve and What to do About it’. During the session, Andrew introduces and examines The Growth Paradox – the strange truth that while business leaders routinely agree on the importance of Growth, they frequently neglect it as a strategic priority and fail to organise their businesses to deliver it. The session continues to discuss how, partly as a result of this neglect, many businesses make the same Big Growth Mistake – a fundamental misunderstanding of how consumers choose between brands and make purchase decisions, and how this mistake leads to expensive, complex and ineffective commercial plans. Finally, the session explains how breakthroughs from the world of neuroscience have revealed a Big Growth Secret – potentially opening up exciting new ways for companies to position their brands for significant, sustained, profitable growth.

Andy spent 13 years at Procter and Gamble in senior marketing roles in the UK and Europe before moving into retailing as Marketing Director at Iceland Frozen Foods. He then spent 6 years in Asia, working for Hutchison Whampoa as Marketing Director for the ParkNShop supermarkets in Hong Kong and China, and then in a pan-Asian marketing/strategy role for Watsons The Chemist. On returning to the UK Andy was CMO for Burger King International, overseeing the expansion of this business around the world, spent 3 years as Marketing Director at Boots the Chemist in the UK, and then held CMO role at Sky broadcasting and at Barclays Bank. Recently he has been working in the Private Equity sector helping businesses reposition themselves for growth. Later in 2016 he is publishing his first book ‘The Growth Director’s Secret’.

Is marketing about creating greater engagement or increasing sales?

Improving your CX approach through digital innovation, personalisation and Martech

Previous post Jo Kelly, CMO for Ubank speaks on How Do You Relaunch A Digital Bank

Next post Steven Fitzjohn, Head of APJ from LivePerson discusses How the way we communicate has changed