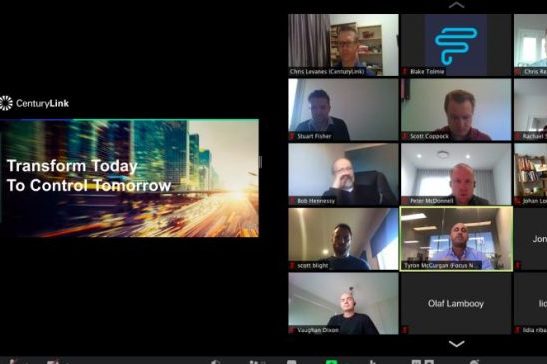 In mid-June CenturyLink and Focus Network hosted a roundtable for leading organisations like NAB, Orica, QANTAS, Tabcorp Lendlease, BHP and others, representing a combined revenue of over AU$125 billion, and employing approximately 285,000 workers.  The participants were chief executive officers and top IT Decision Makers that have a combined budget responsibility of around AU$450 million.

The first part of the session focused upon how organisations have responded to the recent crisis, with attendees sharing some of their business continuity activities and response strategies.  The second part of the discussion involved an in-depth look at the future landscape.

To begin the discussion, Levanes shared industry data on how a little over six months ago, most organisations were concentrated on digital transformation (DX), with many departments actively investigating or having embarked upon DX initiatives to ensure they remained competitive.

“On one hand, six months is relatively a very short time ago,” said Levanes. “Yet on the other hand, it feels like a lifetime ago, because you all know what happened next was COVID-19.  The impact of the highly contagious coronavirus cannot be overstated in terms of how pervasive it has been upon our social structure.”

“The effect to businesses has been just as severe,” he continued.  “Entire countries and economies were abruptly shut down, and only now are some of the regulatory measures being lifted in some locations.”

Levanes said that while every vertical and organisation is different, a common way to think about the repercussions that COVID-19 has had upon businesses is to look at it from three core perspectives of:

Impact of COVID-19 on a financial big four

Jay Patel head of digital learning and technology at National Australia Bank, was also at the discussion –said the financial giant saw the impact of COVID-19 before it happened.

“We were probably proactive by about two and a half, three weeks ahead of everything locking down, and the impact that actually had on our customers,” he said. “From a people point of view, we had lots of processes and mechanisms in place to literally enable about 36,000 employees to go remote, get online and continue to work. And then on the back of that our principle was that we would keep the lights on; be open for business; and support our customers as they started to fall into the lockdown.”

Patel said NAB mobilised a lot of internal staff to move to front end operations, to make sure that there was very minimal impact to its customers and continue to reinforce our tech backbone.”

Patel said NAB had been building out a backbone for enterprise learning – which is all digital for the last 14 months.

“When you start to build [learning capabilities], it’s always old-fashioned classroom learning. I came in and [broke] that model.”

Patel said the company replaced about 300 learning programs into a digital platform, which is probably over a “quarter of a million digital assets” which are now available.

“We built the backbone and I went — well if we’re going to hit an emergency or a crisis, then I want to be able to make sure that our backbone is what enables our workforce,” he said. “We have been building that out anyway and then, literally as COVID-19 hit, we had a BCP plan in the company to serve our customers.”

Patel said that enabling resources that were needed were literally falling in place way ahead of schedule. “It was literally a matter of switching everything on, and off we went,” he said.

Bob Hennessey group CIO of Lendlease said, the multinational construction, property and infrastructure company had a similar experience of having a “pretty smooth run” during the pandemic.

“We have operations in China and by the time Australia was locking down; China was beginning to open up again and people were getting back to offices in Singapore,” he said. Although we know Singapore went through a second wave; issues with international workers; and issues with hostels and so on. But nonetheless operations continued on.”

However, Hennessey said in London — New York in particular, “construction operations shut down for obvious reasons”.

“In other cities around the US construction kept going,” he said. “It’s particularly relevant because the big issue for us, and for so many companies in this time was ensuring liquidity of the company,” he said.

“We did seek at the same time, particularly in Australia, to reach out to the government and do all we could to play a role in trying to ensure the industry was able to continue to operate. [This was] critical for so many jobs,” he said.

From a CIOs perspective there are a couple of things worth noting, said Hennessey. Lendlease has had a major shift over the last four years from less than 20 per cent of its systems and technology running on cloud-based platforms to now over 90 per cent.

“By the end of this year 100 per cent of all applications will be running in either cloud by SaaS services or through public cloud infrastructure,” he said. Last July we took a decision to aggressively push all of our video conferencing or audio-conferencing services away from existing, varied group of providers around the world to go onto Microsoft Teams.”

Hennessey noted that the year before, the company finalised the move of the whole company under 365 as an infrastructure.

“As we moved from the old on prem model to something they’ve morphed into a cloud like service delivery, I’ve got to say I’ve been impressed with how well it held up,” he said. We’re glad we made the move, as we did last July/August.”

Hennessey said it meant his team had the “learning effect” and have gone through the “pain of those changes”.

Scott Coppock interim CIO of David Jones and Country Road Group had a different experience from NAB and Lendlease. He told the roundtable his organisation’s focus was really looking at their project portfolio.

“The week that COVID was breaking or the week before, we had a huge amount projects in play,” he said. “The principle was that for any project that was digitally focused, we would proceed, and pause all other projects.”

For Coppock that was a “good 80 – 90 per cent of projects paused”; and about 70 per cent of the workforce in the contractor space – “unfortunately given notice”.

“All digital projects [have] the right of way in terms of really accelerating some of the functionalities that we had — whether that’s for point-of-sales in our bricks and mortar stores, or our websites,” he said. “All that new functionality to improve customer experience has

changed our delivery models. At the time – we were looking for different delivery models through partnerships with potentially Uber and other players, not just Australia Post – this was fast tracked.”

Coppock said on working from home, David Jones had a COVID-19 case in the head office a week before the lockdown in Victoria.

“We used our Amazon platform to automate our working from home environment,” he said. “We were thankful we did because we actually found some constraints and some limitations in our VPN and that had to be corrected.”

When the call was made to work from home over the next day, Coppock said he felt confident from an IT perspective.

“It actually worked fantastically well — that was a big tick,” he said. “It was great to have it as the as the focus point in all of our executive meetings. During COVID it was all about business operations and online digital performance.”

Like David Jones, multinational company Orica also made sure to test working from home before any official announcements.

Rachael Sandel head of IT strategy and governance at Orica told the roundtable, the multinational company had been transitioning to cloud for quite a while and were heavily in office 365.

“Everyone’s got One Drive set up on SharePoint online and we’d started our Teams journey as well,” she said. Although we have still got Skype our call volume has gone up significantly in Teams. Our investment in cloud early on really set us up for the changes with COVID-19.”

“That’s been significant in the office 365 platform,” she said. “Similar to what Scott was saying for David Jones, we did a bit of a test run before we officially got sent home. We just tried to do some performance tests to flesh out some of these issues that we’re going to have.”

Sandel said some of the issue her IT team had was around Orica’s VPN usage, which went up significantly as people started working from home.

“We ended up putting in split tunnelling for office 365, so people could go direct to the cloud,” she said. That made a big difference and now, the connectivity. Some of the other impacts were projects like the S/4HANA implementation with SAP — that was due to go live in June – which got pushed out for a month.”

Sandel said the project is also being delivered out of Singapore, which just adds a bit of more complexity since they have been sent to work from home again due to the second wave.

“We’re still on track to deliver on the eighth of July now,” she said. “It’s being pushed out a month. But that has delivered a whole range of challenges in terms of testing; how we train people to get ready for this new platform. We’ve managed to leverage the investment we made in Cloud and Teams and all these connectivity services to not be impacted too much.”

Sandel said it has been “surprising” because some of the other challenges Orica had were because of its service desk, which is based out of Manila.

“That service just been around for about six months or so relatively knew we had an increase of about 45- 50 per cent,” she said.

As the discussion turned to what the future enterprise landscape would look like, there was consensus that there is a lot of uncertainty ahead.  Rezentes shared his view that while many organisations have hit pause on their ‘business as usual’ activities, they are fundamentally presented with 2 options at this juncture.

A topic of strong interest and dialogue by the group was around the ‘Future of Connectedness’.  As described by Rezentes, “Pre-COVID, the Network had become a foundational platform for transformative technologies and DX initiatives; and now post-COVID, Network Connectivity is even more vital to successfully rebounding to the ‘new normal’ of work.”

Areas that were discussed was on the importance of rearchitecting the network and successful adoption of SD-WAN to satisfy resiliency and continuous connectivity requirements, particularly as it relates to the current hyper-distributed workforce.  Furthermore, as some organisations are now evaluating having a significant portion of their employees continue to work from home permanently, there was deliberations around how to formally extend the concept of the corporate network to effectively include personnel homes.

SD-WAN is currently a key focus for many of the roundtable participants.  A notable insight delivered by Roberto Calati global head of business improvement and technology at Toll Group

to his peers was, the recommendation to “choose a [SD-WAN] implementation partner wisely.”

Find out how you can modernise your network for the future connected enterprise today.

Businesses will have a dedicated cybersecurity committee by 2025

ITU working with China to develop spectrum management in APAC