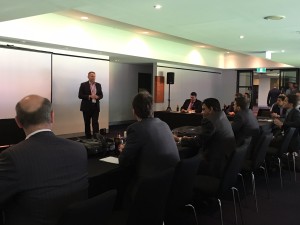 Detective Sergeant Benjamin Case has been in law enforcement for 14 years and currently leads a cybercrime investigations team. He has broad experience across policing and with the intelligence community. Sergeant Case has lead several major cyber crime investigations including computer intrusions into Australian critical infrastructure, distributed denial of service attacks (DDOS), malware investigations, and financially motivated cyber-attacks. Through his domestic ally and internationally, he has a very detailed knowledge and expertise on the current Cybercrime environment and threats.

Commander David McLean is currently performing the role of Manager Cyber Crime Operations within the Australian Federal Police Cyber Crime Operations portfolio. In that capacity Commander McLean is responsible for the investigation of significant criminal acts which may compromise computer systems relied upon by the Australian critical infrastructure community or information systems of national and international significance. Previous senior executive roles occupied by Commander McLean include Manager Professional Standards responsible for internal investigations and maintenance of the AFP integrity framework; Deputy Chief Police Officer, ACT Policing, the AFP’s community policing arm; and Chief of Staff, responsible for the coordination of information, administrative and support services provided to the Commissioner and AFP Executive. From 2004 to 2007, Commander McLean was stationed in Washington DC where he served as the AFP Senior Liaison Officer responsible for cooperation with the United States and Canada on policing issues. Commander McLean is a graduate of the AFP Management of Serious Crime Program, the AFP International Senior Command Program and the Australian Institute of Police Management. He holds a Bachelor of Business and a Graduate Diploma of Executive Leadership. Previous post The second panel discussion focused on ‘Why security is a business proposition not technology’ and was moderated by General Manager for Cyber Security Brian Hay who was joined by Audrey Hanson of Sydney Trains, Lachlan McGill of Healthscope and Carlos Lara of Youi Insurance.